For Southeastern marketing professor Mike Budden, searching the earth for physical remnants of the past is a popular pastime—one that was chronicled by the Southeastern Magazine two years ago. Since then, Mike and his friends Dan Fontenot and Gary Guidry (Southeastern class of ’76) have come across an array of finds, both trash and historical treasures. But what they discovered in early 2017 truly took them by surprise.

The three men received permission to hunt the soil of a property in Jefferson Parish. One day Fontenot, who has known Budden since childhood, got a hit on his detector while working the area. What he eventually found, buried within the brown dirt, was a small gold ring.

Fontenot was of course happy with the catch, but because of the way that he found it his first reaction was one of shock. “It was deep, probably over a foot deep,” he recounted. “What I found was a big hunk of lead, probably the size of a fist, and then I checked the dirt before I filled the hole back in. I always check whenever I dig out the dirt, just to make sure there’s nothing in the pile by the hole, and then I got a hit when checking that dirt and the ring was in it. So if I hadn’t initially hit on that hunk of lead, I would never have found the ring.”

Finding the ring was only the first surprise that the piece of jewelry brought the three friends. After cleaning the ring off, Fontenot could tell that it was a seemingly simple band made of gold and, from the tiny size, had likely belonged to a petite woman. While the three men all dedicate time to tracking down the history behind the items that they discover, none of them noticed or suspected anything unusual about the ring itself.

A visit with fellow metal detecting hobbyists at a Southern Historical Research and Recovery Association meeting changed that perception. “Gary and I took it to one of our club meetings,” Fontenot said. “I thought it was just a gold ring, but then another guy saw it and said ‘It’s a split ring.’ …He opened it right in front of me and then it turned in to two halves with an engraving on the inner part that you couldn’t see when it was whole.”

Such rings are indeed foreign to many people today, but according to Fontenot’s research they were quite popular in the nineteenth century. This ring, carefully engraved on the inside with tiny cursive lettering, is believed by the men to have been a wedding ring due to the inscription. There are two names listed, Louise Cantrelle and Louis Ferchaud, along with a date of August 25, 1870. With this information as a guide, Fontenot got to work on tracking down the ring’s story. Upon scouring the internet, his search led him to the ring’s rightful heir, Kimberly King.

King also has a passion for history, but she channels it through genealogy rather than metal detecting. Fontenot was able to locate her because of the genealogical research on her family which she has made available online. “Just from the name of the man on the ring, which is her great-great-grandfather, I was able to find her on the net, and then we just got in touch via email and went from there,” he said.

If the name Kimberly King sounds familiar to you, there’s a reason. Serendipitously, King was the guest speaker at Southeastern’s annual Marketing Breakfast this past April. She is also a class of 1985 Southeastern alumna, who now resides in Tennessee.

Upon learning of the connection, Budden was shocked. “It was amazing when I saw the emails and realized that it was Kimberly King, who was our marketing speaker. I told Dan ‘I know that lady!’ …It’s amazing, I just met her in the spring,” he said.

King is not related to Louise Cantrelle, as she died in childbirth at the tender age of 21. However, Louis Ferchaud eventually remarried Caroline Jaufroid, and King is a direct descendent of this couple.

How the ring came to be buried where it was remains a mystery, though the men have a conjecture that the young couple may have lived there. “We’ve pulled out hundreds, if not thousands, of square nails from that property, which is a pretty good indicator that there was a building there,” explained Guidry. “So I think there was a house there that burned, and that’s how the jewelry got left there. That’s my theory, but we’ll never really know.”

While the possibility—albeit rare—of finding buried gold objects might draw some people to metal detecting, the three friends all commented that the biggest thrill for them lies in the history. They take the time to conserve and study the past behind the pieces that they uncover and then generally keep or give them away. Most of the objects found are also not of much monetary value, but the men are genuinely awed with the historical significance and connection to the past the pieces represent. “It’s amazing to find something from 200 years ago, or longer, and I just don’t see myself selling it,” said Budden. “It’s part of history.”

So rather than keeping or selling the wedding band, the three friends traveled together to Tennessee in August to gift it to King—bringing to her a tangible piece of her own family’s history in the form of one extraordinary little gold ring.

Ten Southeastern vocal performance students and one alumnus placed at the Louisiana Chapter of the National Association of Teachers of Singing (NATS) competition held recently at Northwestern State University in Natchitoches. Four of these participants took home first place awards.

Sara Cage of Baton Rouge was the first student in Southeastern history to receive three first place awards at the competition: in the senior women’s division, Hall Johnson spiritual category, and upper level music theater-women. Cage also received the Governor’s Award as the most promising student at the competition.

The auditions were judged by voice teachers from the NATS Louisiana Chapter. Students participated in lectures and master classes as part of the conference.

In October 2016, the Louisiana Board of Elementary and Secondary Education (BESE), with support from the Louisiana Board of Regents (BoR), adopted landmark regulations to expand yearlong residencies and competency-based curricula statewide for teacher preparation programs. By July 2018, all teacher preparation programs in Louisiana were scheduled to include a yearlong residency alongside an expert mentor, and all preparation programs to include a competency-based curriculum that provides teacher candidates with the knowledge and skills needed in order to be prepared for their first years of teaching.

The residency program designed by Southeastern’s Department of Teaching and Learning was recently highlighted by local television station WYES for its year-long student teaching residency. The documentary focused on the reciprocal relationship between mentors and teacher candidates and also highlighted how the program enhances the overall relationships between the university and school districts.

“The show also focused on how this process will assist with addressing the teacher shortage,” said Department of Teaching and Learning Transition Coordinator Jordan Ahrend.

The program  can be seen at https://www.wyes.org/tv/teaching/.

Sponsored by the Campus Activities Board, the pageant is affiliated with the Miss America Pageant system. Blank will advance to the Miss Louisiana pageant that will be held in Monroe in June. 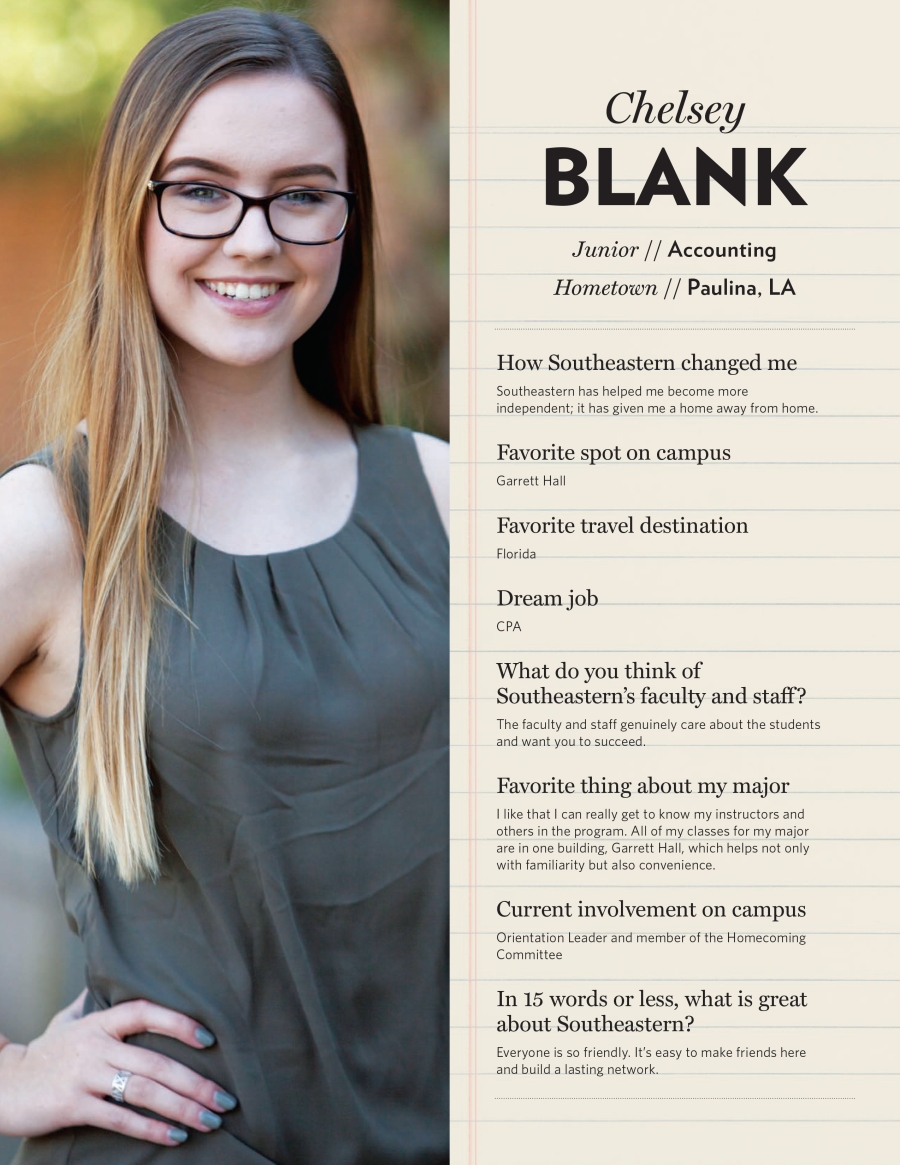 On Saturday, December 1, Southeastern’s College of Nursing and Health Sciences hosted a dog-gone good time for a “pawsatively” worthy cause—its first ever Canines and Cupcakes fundraiser. The event for canines and their owners took place at Southeastern’s Kinesiology Building.

Dean of the College of Nursing and Health Sciences Ann Carruth said the event was not only a fundraiser for the Nursing and Health Sciences Foundation to promote student educational activities, but it also served as a stress reliever for students as final exams approached. Families considering getting a dog over the holidays were also encouraged to attend and learn about dog ownership.

“It was a fun-filled day of yoga, with mats provided, games, paw and law prints, photos with Roomie and the Grinch and, of course, cupcake decorating at our cupcake station,” she said. “Attendees could bring their canine companions for some exercise, fun activities, and demonstrations throughout the event.”

Vendors for dog-themed shopping, paw print face painting, a kissing booth where attendees could volunteer their dogs to give kisses, games, and music were also included in the day’s activities.