Louisiana is a state known for many great things—amazing food being one of them. Unfortunately, a prevalence of sedentary lifestyles is another. This inactivity can lead to significant consequences. Through studying the effects of activity on children while working with and encouraging local youth, Southeastern researchers are striving to help create a healthier way of life for everyone.

In United Health Foundation’s widely-publicized 2018 report, Louisiana ranked 45 out of 50 for obesity—36.2 percent for adults. Overall, when including other health factors, Louisiana was determined to be the least healthy state in the nation.

According to Pennington Biomedical Research Center, childhood obesity is an epidemic in Louisiana, with approximately one in three now falling into the obese category. Yet the problem spans beyond our state as well. The National Center for Health Statistics found in their 2015-2016 survey on the “Prevalence of Obesity Among Adults and Youth” that childhood obesity rates have more than tripled since their 1976-1980 survey.

These trends create a serious negative impact. The Mayo Clinic states that “childhood obesity is particularly troubling because the extra pounds often start children on the path to health problems that were once considered adult problems—diabetes, high blood pressure, and high cholesterol. Many obese children become obese adults, especially if one or both parents are obese. Childhood obesity can also lead to poor self-esteem and depression.”

Aside from the physical toll, obesity also creates an economic drain. United Health Foundation continues by saying that “the costs associated with obesity and obesity-related health problems are staggering. A 2017 study estimated the medical costs of obesity to be $342.2 billion (in 2013 dollars). Adults with obesity spend on average $3,429 more per person annually on medical care, compared with healthy weight adults.”

In 2015, Associate Professor of Family and Consumer Sciences Holly Kihm was awarded a Board of Regents Enhancement Grant to develop IPAL, an interactive physical activity lab for youth. IPAL was implemented to address these larger concerns and increase Southeastern student research opportunities and real-world skills in working with youth and their families to build healthy lifestyles. The children who have been participants in the program are all volunteers from the Southeastern Lab School.

For Spring 2019 semester, a new project was chosen in collaboration with Assistant Professor of Kinesiology and Health Studies Ryan Green, who is also a certified athletic trainer. Kihm and Green, both endurance sports enthusiasts, were excited to work together with IPAL—bringing together their two different departments within the College of Nursing and Health Sciences to help advance the health and well-being of surrounding communities.

They decided to focus on a girls’ progressive running program, which they titled Lionettes on the Move. “Lionettes on the Move is an initiative to understand children’s behaviors and attitudes towards physical activity and nutrition in an effort to design environments that promote health and wellness,” Green explained.

The importance of and potential positive impact from this study is substantial. “Much of today’s society is designed to encourage a sedentary lifestyle (order ahead service, drive-thru windows, food / product delivery service to your door,  etc),” Green said. “It is a challenge to reverse that. Decades ago you were an outlier if you were sedentary. Today, you are an outlier if you are constantly moving. We would like to help reverse that thinking.

“By scientifically understanding what obstacles there may be to children moving more and by moving more of them, we can help public and private entities design environments (physical, emotional, and psychological) for health and wellness throughout the lifespan. We must make a positive impact on the health of the next generation. It is our responsibility.”

With participants selected and Kihm and Green setting the pace, assisted by graduate assistant Emilee Hickman and research assistant Callie Lambert, the study was carried out throughout the semester and culminated with a race around the perimeter of Southeastern’s campus on May 7, 2019. 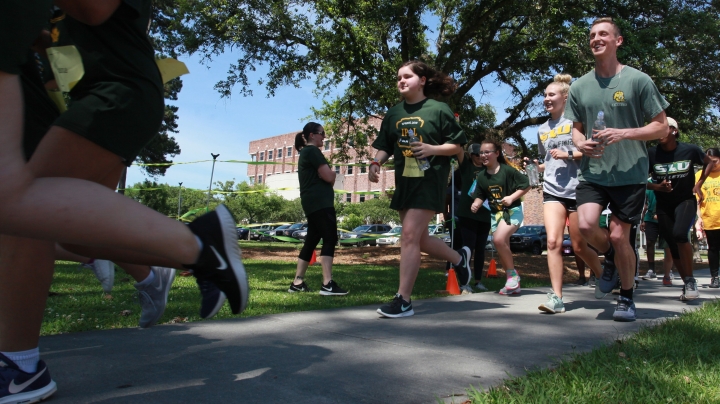 Kihm discussed the process. “At the beginning of the study, the girls participated in baseline assessments, including how much distance they could cover in 20 minutes. Based on those results, a progressive running plan was developed to help the girls reach the end of semester goal of completing the two-mile fun run. Distance was measured using activity trackers, and heart rates were collected using wrist-based heart rate monitors. Each week during the semester, the girls completed their prescribed running activity and were asked to complete additional activities throughout the week at home. The girls also learned about proper running form, stretching, and pacing with the assistance of the SLU track team. At the end of the semester, final data was collected.” This data was submitted for publication during the summer.

For the girls who participated, the benefits were not only physical but mental as well. According to both Kihm and Green, the girls’ boost in confidence was evident. “I feel the project gave the girls an extra boost of confidence in that they were capable of making a goal, working toward the goal over the course of a semester, and then meeting that goal,” Kihm said. “Most of the girls thought running the perimeter of the entire campus was not doable for them. To see each one cross the finish line was very exciting for them and for us!” 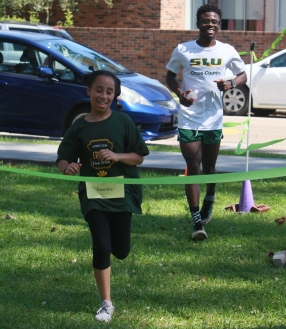 The girls’ confidence, enthusiasm, and high energy was evident when watching them take off on their big race around campus at the end of the semester-long program. The first-place winner, 8-year-old Jasmine Dejean, completed the two-mile course in only 23:36. This even beats out the average 5k running speed for a 16- to 19-year-old female by 21 seconds a mile.

Southeastern track student-athletes were buddied up with the girls for this run, motivating them throughout the course—and throughout the program prior to it. They served as mentors and spoke to the girls about the lifelong benefits of strength, flexibility, and cardiovascular wellness. “Sometimes getting this important information from a college athlete is more exciting than getting the same information from a parent or teacher,” Green noted.

“It was so nice to see our students encouraging their running partner in a positive way during the event,” said Kihm. “I really believe our girls hold our student-athletes in high regard, and I know there will be girls from the IPAL program on SLU sports teams in the future.”

Seeing the glowing look of accomplishment on not only the face of the first-place finisher but all of the participants, the true personal impact that such a program can have—in addition to its potential influence on a larger cultural shift towards better health through increased evidence and knowledge—was apparent. “The girls were able to complete the fun run with smiles on their faces! It is our hope they will continue to participate in running activities, and it will become a lifelong healthy habit,” said Kihm.

Lambert said that being a part of helping facilitate this type of personal enrichment was what she loved most about the project. “My favorite part of working in the lab is getting to witness the progress and growth of each participant. Each semester every participant shows intellectual growth regarding nutrition, proper exercise habits, and how to maintain a balanced lifestyle, along with increased physical activity levels and enjoyment while performing exercise.”

The impact of IPAL and research projects like this that use it has indeed been profound on both undergraduate and graduate Southeastern students as well. Lambert discussed her own experience, saying that “being involved in IPAL the past two years has opened my eyes to research. I never considered the possibility of conducting my own experiments or realized the true value of everything that could be accomplished and discovered in a lab setting. I now have a deeper appreciation for research and have developed a desire to investigate traits, characteristics, and variables regarding nutrition and physical activity in children that could one day impact the lives of many children.” 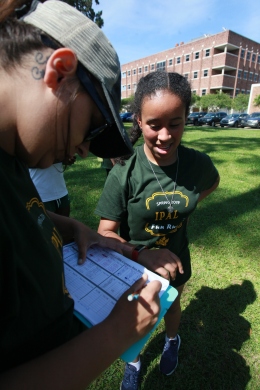 Southeastern students who participate in the program receive more than just hands-on experience. They receive encouragement to use their experience and research to help make a positive difference in the world. “Students need to understand that taking research and applying it to the benefit of real people is the most important part of the scholarly process,” Green said. “Though this program took place through calculated prescription so that the results would be valid, it is critical to take these results and figure out the most useful way for them to be applied to the community. Research does no good if it is kept in a research journal and the general public cannot make sense of it. I think that this study has a tremendous amount of real-world applicability.”

Dependent on IPAL grant funding and undergraduate student participation, both Kihm and Green hope to continue Lionettes on the Move every spring semester.

“With a new, impressionable group of girls involved and the success of the program, Lionettes on the Move has a chance to make significant differences in our youth,” said Green. “It is programs like this one that can make a health difference in the next generation . . . and the next . . . and the next. And that is something that will benefit us all.”