Determined to Rise: The Woman’s Suffrage Movement in Louisiana

The Centennial Women’s Suffrage Project (CWSP) at Southeastern was created to celebrate the 100-year anniversary of the passing of the 19th Amendment, securing women the right to vote.

A traveling exhibit, Determined to Rise: The Woman’s Suffrage Movement in Louisiana, was organized by CWSP to celebrate the challenges and triumphs of the women’s suffrage movement in Louisiana and the 100th anniversary of the ratification of the 19th Amendment. It will be displayed during the first two weeks of August at the Union Museum of History and Art in Farmerville, LA, and at the Shaw Center in Baton Rouge during the last two weeks of August. Visitors can view the exhibit free of charge. 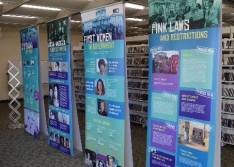 Developed with grant support from the Louisiana Endowment for the Humanities (LEH) Rebirth grant program, the exhibit consists of eight panels depicting photos of Louisiana suffragists, a timeline of significant events, the movement from the African-American woman’s perspective, laws that have changed since women gained the vote, and Louisiana women who have made their mark on history.

CWSP is currently accepting applications to host Determined to Rise from September 2020 through 2021. The exhibit consists of four double-sided retractable stand posters, 31.5” w x 89.75” h; a guest book for thoughts and reflections; a retractable literature stand; a suffragette costume and mannequin; a six-foot table; a table throw and runner; an LED TV; and panel identification cards. Each exhibit period will be for 2 weeks. 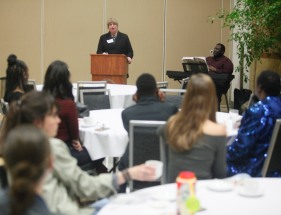 The Centennial Women’s Suffrage Project has also participated in several events throughout 2020. These began on February 13 with a talk at the Old Governor’s Mansion as part of their Heritage Lecture series. The presentation was held in conjunction with the Mansion’s grand opening of their First Ladies of the Old Governor’s Mansion exhibition. On March 5, CWSP held its first annual Grit and Grace Conference and Equali-tea event to promote scholarship on gender equality, social change, and political activism. Beginning July 6, the group will host a Summer Institute on Teaching with Primary Sources, funded by a grant from the Library of Congress. This workshop aims to help local K-12 teachers design lessons and work with teaching primary sources dedicated to gender equality and the suffrage movement.